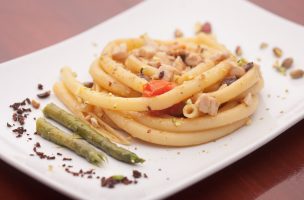 "Ziti" is an Italian pasta shape consisting of a long tube. Here they are served with tomato and asparagus in a typically spring-time recipe

Packing the right gear is for me the last stage of a process where I try and understand the least I can use to get the look that I want.

In the pizzeria I wanted to achieve a good backlight effect. I had tried, without success, with a smaller and sturdier beauty dish, but eventually settled for my largest softbox, an Elinchrom Rotalux 90×110.

While in my studio, I would also add a second Rotalux for fill. However I made it do with just some reflecting foam board so that I could pack lighter. I described here  and here the setup.

Packing-wise, the second problem for me is being as much redundant as possible so that, should something break, I have a replacement. In particular I worry that the camera or the data recording on the card may fail. I don’t like the idea of a backup camera for two reasons: first, it would be something that I need to carry with me and that I would only use is something goes wrong (so, in the best scenario, it would be useless); second, it is boring (if I already own, for instance, a Canon EOS 5D, I would find owning a 6D as well very uninteresting). Hence I prefer the route of a completely different camera body (and lens), that can serve me not only as a backup but also to achieve a different look while using it together.

This is why I chose to bring with me a Fujifilm X-T1 with the Fujinon XF 35mm f/1.4 (giving me fast autofocus and close perspective) together with a Canon EOS 5D with an adapted Zenzanon PS 110mm f/4 macro: each set-up can individually serve me well in case the other fails, but used together, they can give me two looks instead of one. At home, while reviewing the shot material, I find myself selecting either material as the best, according to the plate or pizza I had in front of me.