The best lighting for pizza 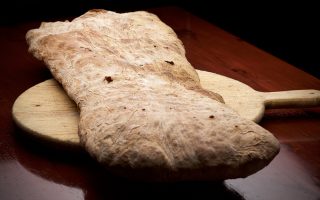 Pizza is food so, traditionally, benefits from (moderate) backlighting. Pizza is also large and flat: a large(r) and flat light source was my choice. The Elinchrom Rotalux 90x110cm softbox, placed about 30cm above the pizza, slightly angled, was large enough that I could use its “tail” like some sort of moderate backlight. A small reflector carved out of cardboard provided an almost invisibile fill-light.I described this setup here and I have recently used it on location. The large Rotalux is not compact but at least it is one. I photographed some creations of La Panacea, a pizzeria near Pisa. The results seem delicious, just as much as the pizzas themselves.