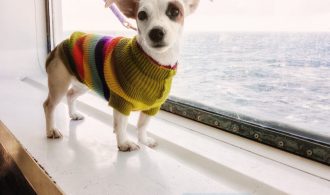 A cute small dog stands on the large window of a passenger ship, with sea view

Ferries to Sicily with a dog

I have travelled several times on Grimaldi Group’s passenger ships between continental Italy and Sicily with a car and a dog. I will summarise my journeys and I hope to help and prepare (encourage? deter?) a wanna-be traveller wishing to reach Sicily from mainland with their fiery beast. I have always chosen a cabin so I will focus on this way. My observations are updated to spring 2019.

Grimaldi Group includes ships that go under the name of GNV (Grandi Navi Veloci) and Grimaldi Lines. They are basically the same but they do not “compete” with each other: for instance, the route Genova-Palermo is served by GNV only, while from Livorno you can only leave onboard of a Grimaldi’s ship. The lack of competition (with other companies especially) is in my view the main source of the negative aspects that I experienced during these trips: the traveller user is left without choice and the market is not pushed towards improvement.

The main difference between GNV and Grimaldi is that you can find some cabins designated for pets (and yourself) in the former but not in the latter. So, if you want such a cabin, the choice of the company and indirectly the port is locked because not all ports are served by all the lines. You may still bring your pet with you on a ship without cabins, provided you pay a ticket for your pet — more on this later. The cabins for pets are identical to the standard ones except they don’t have a carpet but a vinyl-like hard floor.

The mainland ports that I have travelled to and from are Genova, Livorno and Civitavecchia’s, while the ones in Sicily are Palermo and Termini Imerese. Apart from the obvious considerations of location (if you live in the North, you might prefer Genova…), these ports are different and the service they provide, or not provide, may be important according to your sensibility. The biggest difference, ports-wise, is perhaps the check-in procedure.

How does it work? Well, to travel, you buy a reservation and then you exchange it with a ticket (check-in) once in the port. The way you check-in changes with the port. In more modem and efficient ports (Genova and Livorno only) the check-in is simple: you get with your car at the port, you lower the window glass, show the reservation to the guard, who reads it with a barcode scanner, and you’re done — at this point you just need to follow the directions of the personnel in the port and queue with the car and, once you have disembarked the car and are on foot on the right deck, you will exchange your printed reservation with a card key for the cabin.

How to buy the ticket

I recommend doing it at an experienced (of ferry tickets) travel agent’s, because the website of the company is notoriously buggy and can leave you hanging on without knowing if your money has been taken and the reservation confirmed. Alternatively I suggest a phone call with the operator. Avoid if you can the line’s website. An experienced travel agent however is a much better choice because they will be able to list for you a few compatible dates and possibly different ports for arrival or departures, whereas a traditional search form will ask for one route only. If you happen to live around Pisa or San Giuliano Terme, as I do, you will love the Le Farfalle di Frida travel agency.

Unfortunately, in other ports (Civitavecchia, Palermo, Termini Imerese) you will need to show the printed reservation to at least two guards, one at the port’s entrance and often once inside the car port, after which you will have to find the ticket office, park the car, get off, queue for the check-in where they will check reservation and documents and give you a ticket; with this you will queue to enter the ship and, once onboard, exchange it for the cabin’s keys. The difference may mean a lot when there is congestion and the queues are long, especially because, coincidentially, these less efficient ports also happen to be in less efficient towns.

This brings us to the other difference in terms of ports: propension to congestion and heavy traffic. From this point of view, the very worst port / town combination is Palermo, that you should try and avoid in favour of Termini Imerese. Palermo’s is plagued by a city which simply is not suited to be travelled with a car—although I suspect that if the decision of travelling to Sicily has already been made, this particular aspect has already been considered and possibly digested. While arriving in Palermo may be acceptable because the car traffic that you will find once you have left the port will just slow you down, departing from Palermo requires that you aim and arrive in the port at least three hours, better four, before departure, because the abysmal city roads and port services will slow you down to the point that you will miss the boat. (By the way, I found Waze decently able to avoid traffic jams) Off season embarkment times may be still reasonable but in case of a fully booked ship you must expect delays of two-three hours or even missing the departure (to me, it happened that I missed it because I was literally stuck in the traffic just a few dozen yards from the port, where I had been for almost a couple of hours)

Cabin for pets or not?

If you can board a GNV and book a “Amici a quattro zampe” cabin, the rest is relatively easy: you park the car, take note of the position, walk to your deck (there is usually only part of only one deck dedicated to pets), you are handed a card key, and you finally take possession of your room. From there, with your dog, you can only follow a limited route where dogs are allowed, leading you to an outdoor area where they can (and usually do) per and poo. Then, reverse. If you want to stay with your pet (as they ask you to), you basically can’t do anything else: the pubs, the shop, the restaurants are all off limits for your dog and therefore you only have three choices here: give turns with your partner (if you aren’t travelling alone), obey and limit yourself to your cabin and to the dirty dog area, or do like most do, occasionally trespassing into forbidden areas. It is indeed shameful that if you want to be respectful of the rules you must give up a good portion of the amenities onboard that you paid for.

No cabin for pets

Now, the experience on a Grimaldi ferry, where no dogs are allowed into the cabins, is a little different and much more “Italian”, meaning that more so than ever you are faced with the choice between being respectful of the rules and doing the right thing.
Let’s say that you book a cabin and pay the fee for your dog: this grants you the use of a luxurious cage on the upper deck, outdoors, cold in winter and hot in summer. At this point several things may happen, according to the mood of the staff, the number of dogs onboard and how many passengers with dog had already checked in before you. The nastiest is that onboard, together with your cabin key, you are handed a key for the cage. Unfortunately, not only this key will ultimately be worthless for you (unless you have decided already that you want to dispose of your dog and that you want to do so by leaving it in the cage in a hot summer day), but they might also ask for a deposit, in the form of your I.D. document (I said deposit but I should have said ransom). In this latter case I have always simply refused since a) they have no authority for asking to withhold your ID and b) I really have no interest in getting that damned key. Basically they ask from you for something that you will want back because they don’t trust you. My advice is this simple: never relinquish your documents.