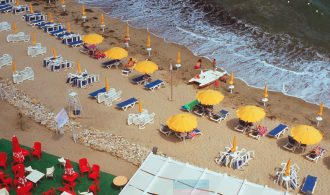 For a working photographer, choosing the cameras and the lenses to pack for a holiday isn’t easy (the mere proximity of those two words should raise an alarm).

The possibility of being able to do everything seems to feel the need of translating into the obligation of doing everything: why then preparing for stills only if videos can be shot as well?

Just until a few years ago, having a camera that could also shoot good video was not a given. If you want to enrich your still captures with footage, you had to use additional equipment. The choice, back then, was… a choice.

Not today. A modern camera will most likely shoot video. And if you can do it, you should do it… shouldn’t you?

Well yes, if you want to be productive. However I used the word “holiday”, before. I confess that I’m not in love with my Sony α6500 (which at present is my only camera of doing both) and the idea of spoiling my photographic enjoyment choosing to pack the Sony didn’t put me in the mood for a holiday.

Less is more enjoyable, and I confess – again – that I had to force my hand for leaving behind a footage-capable camera. I wanted to be minimal, perhaps not in the strictest sense but by just packing a film camera. While I don’t full enjoy capturing footage, I was really looking forward to my EOS 1n loaded with some good Velvia and Ektar, and this is what I eventually managed to pack, leaving behind any digital capturing device but my capable iPhone SE.
My choice of 1n with the 70-200 and the 35, both stabilised, can only be described as minimal in respect of giving up the idea of capturing footage.
I like this choice. I really like it. It’s a holiday!

So, while I pack, I am having a look at some old pictures shot with Velvia.